How to use TypeWell Everywhere (standalone program)

TypeWell Everywhere lets you use your TypeWell skills to type quickly in all your programs, on a Windows computer. Think of it as an upgrade for your keyboard. This program lets you use abbreviations when you’re writing emails or reports, filling out web forms, instant messaging, etc.

TypeWell Everywhere is NOT a word processor text editor. Instead, it runs in the background while you're typing into other programs (including text editors, word processors, web browsers, etc.).

Can I use the standalone version of Everywhere for regular transcribing?

In most cases, this is prohibited. TypeWell Everywhere is for transcribers' personal and non-commercial use only. It is not designed for providing communication access services in classes or meetings.

The first step in using Everywhere is to close it. Seems like a Zen thing, doesn't it? This is because you don't need the Everywhere window open, except occasionally when you want to change the menu options.

By default, TypeWell Everywhere is set to open when your computer boots up. You’ll see a window that looks like this:

If you don’t want TypeWell Everywhere to start up automatically when you start Windows, you can uncheck that setting under the File menu.

When you close the TypeWell Everywhere window, you'll still see a small TW icon in your system tray. This lets you know that Everywhere is running in the background silently accelerating your keystrokes.

To use Everywhere, start one of your other programs and press Ctrl-Space. This turns on (enables) abbreviation expansions in that program.

To disable abbreviation expansions in any program, press the** Esc** key. You’ll notice the TW icon in your system tray change, with a red border and slash.

Everywhere “remembers” which expansion mode you set for each program. As you switch between programs, the icon in your system tray will change accordingly. You can leave abbreviations enabled permanently in the programs where you type a lot, and leave it off in others.

TypeWell Everywhere has a few keys that work differently than in the TypeWell Transcriber program.

Ctrl-Comma undoes the last expansion (including any auto-punctuation), without deleting the abbreviation.

Sometimes you may need to type a semicolon and don't want it to act as the quick-correct key, such as in a "wink" emoticon like ;-). To type this, first type a period before the semicolon, like this: .;-) This lets Everywhere know it should leave the semicolon character in the text. Alternatively, you can type Wi, which also expands to ;-).

Another side-effect of this feature is that you need to watch when editing and adding endings onto existing words. If you click at the end of a word and add a letter like "n" and then a space, Everywhere will expand the n to "in". For instance, if you click and add "n" and a space to the end of the word "the", it'll produce "thein" rather than "then". An easy way to unexpand such cases is to type Ctrl-Comma right after the unintended expansion.

Everywhere also includes the PAL. You can use your Everywhere PAL to store alternate signature lines, canned email responses, form data, or any text you type frequently.

To quickly enter a new PAL entry: type the phrase, semicolon to select it, then type Ctrl-Enter. This opens an abbreviation window for you to quickly type the desired abbreviation for that phrase, then press Enter to store it.

As with TypeWell transcriber, your abbreviation expansions can include keystrokes like {tab} and {enter} if you enclose those words in curly brackets.

Symbols (not in the Mini version)

Everywhere also lets you put foreign words into your PAL. This gives you a fast way to type common words that are properly written with accent marks.

Some very common foreign words are already built into the dictionary for your convenience, such as señor and résumé. Turn on this feature by going to Everywhere's Abbreviation menu and checking the Accent Foreign Letters setting. 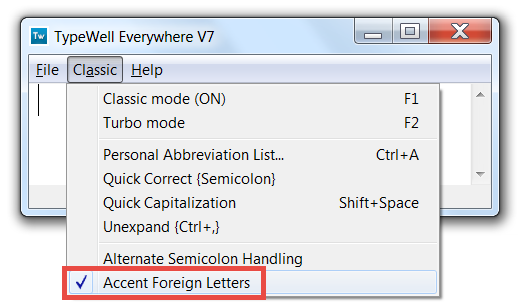 Note that not all Windows programs can accept special characters, although most can. If abbreviations like senor are expanding into something strange in a particular program, turn off the Accent Foreign Letters setting. 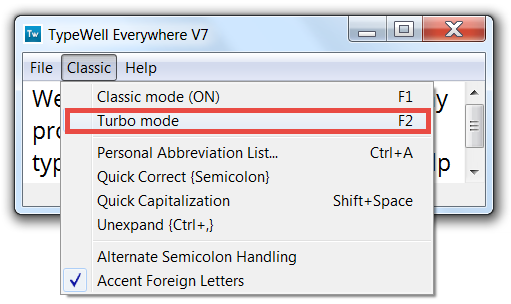 Turbo was designed for experienced TypeWell transcribers who have already mastered the original Classic abbreviation system AND who have excellent chunking skills. If you purchased Everywhere fewer than 6 months after completing the TypeWell Basic Skills Course, then you likely were given a 7c ("Classic") license. When you're ready to update from 7c to 7t, just contact us!

In Case of Difficulty

If you have any problems or suggestions with TypeWell Everywhere, or if you have a suggestion to make this article better, we'd love to talk to you.

Next Article in Topic

Was this article helpful?

Not finding what you're looking for? Contact Us Directly